Core destructor of the Environment-The Humans

Ecosystem is one topic discussed most frequently since the beginning of the last few decades. The generation today has only seen the destroyed and wrecked environment. The promises we made by having the sustainable environment tag is going in waste, unlike the plastic bags.

Talking about environment in this time can be directly connected to a scenario having smoke coming out of the vehicles and  chimneys making a black cloudy atmosphere, polluted water from the chemical using industries flowing into the river of already polluted water, Harvested land fuming in fire because its owner is burning the waste stubble, breathe choking due to high levels of fumigants and pollutants in the air , eating fruits & vegetables injected to grow humongous in size  and filled with fertilizers instead of nutrients .

The environment didn’t start to deteriorate on its own, as if one night it decided to ruin itself and disturb the humans living on the plants to take revenge from Earth. Sounds weird, right? Because it is we, the Humans, who are unashamed to accept that we are ones who have brought our dear mother earth to this stage. 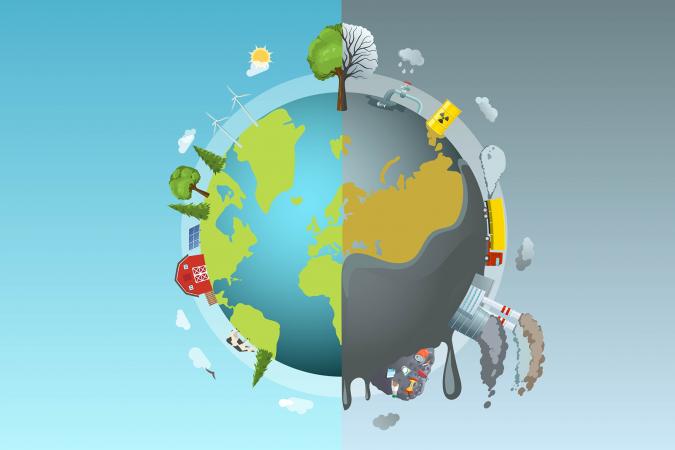 As the humans are running in a race towards a better life they have actually forgotten that they have left the better life gifted to them as an inheritance .All the components which were devised for the advancement of human life are creating a hell on the planet. Majorly speaking of environmental effects one can list a few like:

These miserable effects are affecting the lives of humans at such high rate that death rate since the last 3-5 years has increased alarmingly. And all the credit can be indirectly be given to the human race. We are creating weapons for mass destructions in disguise of advancement or development which will one day consume us all. No matter how many researches, articles, awareness programs or speeches are made, these won’t bring any difference until unless  each & every person is not worried about his own health, health of his/her family & friends, & most importantly about the health of the planet. The need of the hour is to STOP, LOOK at the degraded environment, & PONDER at what this global development is leading us to. Humans have grown super intelligent in inventing new technologies but has grown extremely dumb by destroying nature’s gift of a balanced environment .We are putting our lives in dangers by these new methods of growth & development.

Health issues have surrounded humanity more than ever today .And all these issues are, dramatically, arising from the naturally occurring resources like soil, water, air, green vegetables & fruits and many more. New born babies take birth having troubles with their health already. The level of these effects & pollutions has gone so highly extreme than now it has entered in our genetics and give rise to genetic diseases which then are transferred to the off springs as genetically transferred diseases which have no cure.

Humans and nature are together fallen into the pothole of sickness which they can only overcome with each other’s togetherness. It is high time that we give back our mother nature, the love & care it has showered upon us. The key to a better future lies in the health of the humans and the planet earth. We all need to work hand in hand to get our balanced environment back. It’s never too late to try and become greater than before, with a superior and more desirable ecosystem. Saving this planet is our responsible and we must not run away from this noble duty.